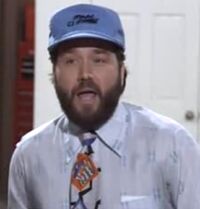 Albert "Al" E. Borland is portrayed as Tim Taylor's un-hip sidekick on the show-within-a-show Tool Time. He is also one of Tim's closest friends. According to the season 1 DVD, the character's original name is supposed to be 'Glenn' He is played by Richard Karn.

Borland is slightly overweight, and always seen wearing flannel, which Tim cracks jokes about consistently. He wears flannel so often that, in the wedding episode, Tim bets his friends that Al is wearing a flannel thong. The reason he always wears flannel came from his father, who, when asking young Al to assist in their own various home projects, would put his old flannels on Al to keep him clean or warm. Al wears flannel as a tribute to him after he died.

Tim also often criticizes Al's mother, Alma Borland, who is never seen, but is apparently severely overweight. She died in one of the later episodes when Al asks for her permission to marry Trudy.

Al also has a brother, Cal, who looks and dresses almost exactly like him, though he is a physicist. In the episode commentaries featured on the Season 1 DVD Set, the executive producers reveal that "Cal" was a fan from Texas who sent his photo in a fan letter. Upon seeing his resemblance to Al, the producers brought him in to be Al's brother, Cal.

When Al was younger, he took fencing in school and served in the Navy, and although he wanted to see the world, he was stationed in Nevada. A year after getting out of the service, Al was a construction crane operator with Local 324. Al owns a 20% share in Harry's Hardware, a local hardware store. He drives a 1983 Mercury Grand Marquis which his mother passed down to him. He collects keys from classic cars and even designed a board game based on Tool Time, which he sold and marketed to great success-the object being not to end up in a hospital! Al also has his own fan club. He has several years of his life on several VHS tapes.

Al's beard is also a constant joke by Tim. In one episode where Tool Time is celebrating their fifth anniversary show, Al is shown in the first ever episode of Tool Time without a beard & Tim with a beard.

He generally knows what he is doing more than Tim, and he seems to have a better knowledge of tools and home improvement than Tim. In the first episode of Tool Time, he was described as a "master plumber" by Tim Taylor. He also is very serious about his job, unlike Tim, who often jokes and messes up the project. Al often speaks fondly of his time as a U.S. Navy Seabee. Although Tim is the one who messes up most of the projects on Tool Time, Al is often the one who is blamed for the mishap, or is injured by the mishap. Despite this, Tim and Al are good friends offstage, and Al often helps out, either by helping with home projects, or by watching his children.

Throughout the series, Al has had four different girlfriends. In season one, Al went out with Greta Post, who he met while she was volunteering to help out during a Tool Time show. In season two, he had a single neighbor named Cynthia, but he kept his relationship platonic with her because she was "on the rebound" and he didn't want to take advantage of her. He almost went out with Tim's ex-girlfriend Stacey Lewis; however, he wasn't interested in her as much as he thought. From seasons three through five, Al went out with Dr. Ilene Markham, an orthodontist who is sisters with one of Jill's co-workers. They got engaged, but they decided at the wedding that they shouldn't marry. Al met a woman named Trudy in late season seven and married her in the series finale episode in 1999.

Retrieved from "https://homeimprovement.fandom.com/wiki/Al_Borland?oldid=12722"
Community content is available under CC-BY-SA unless otherwise noted.