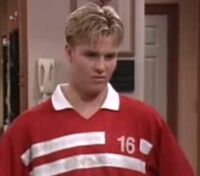 Bradley "Brad" Michael Taylor is a main character in Home Improvement, portrayed by Zachery Ty Bryan. He is the eldest son of Tim and Jill Taylor. He is the oldest and the most athletic of the three boys, his younger brothers being Randy and Mark.

As a preteen, Brad often picked on Mark with Randy. While all three boys are portrayed as troublemakers at one point or another, he is the only one to have had a run-in with the police during his early years (after throwing bricks at windows in an abandoned greenhouse). As a child, Brad had blond hair that grew at the back, frequently experimenting different styles in an effort to attract girls.

Brad's teenager years were quite on the front of Randy and Mark. No longer picking on his younger brother, he instead offered friendly advice (like keeping Mark's poor eyesight a secret) and giving advice on girls (although his advice typically didn't work out too well). As a teenager, Brad kept his experiments in hair going, hair going from long to being tied in a ponytail, and then shortened during his late teenage years.

Out of the boys, Brad is the only one known to have smoked marijuana, having been caught, and provoking strong reaction from Tim and Jill, who went further and sent a strong warning to Randy and Mark as well.

Brad's interests in tools and sports developed during his teenage years, as did his interest in girls. He held his primary interest as sports; however, and made that the centerpiece of his teenage life, setting up for adulthood.

Sports was developed as Brad's primary interest in his teenage life. Brad got a job at a sports store, and put that job over his PSAT's. He became a soccer star. He was even offered a spot on a professional English soccer team, the Birmingham Chubbs. He turned that down however, in favor of a scholarship to UCLA.

In the episode "Knee Deep" Brad badly hurts his knee during a taping of Tool Time on location, he uses crutches in the next few episodes and his scholarship is put into doubt. Brad was devastated when his knee was injured, and his ability to play soccer was threatened. Out of his love and passion toward soccer, he took a risk in playing a soccer game for a scout when he was only 85% healed. Though his injury worsened, it wasn't permanent, and the scout later said that Brad had a good chance of receiving the scholarship, the gamble pays off.

His character was known for experimenting with different hairstyles; Brad's hair was sandy blond, with lighter blond highlights. At various times during the show, Brad had floppy bangs and a close-cropped hair on the sides and at one point, to Tim's disdain, a ponytail. He appeared to use gel to style his hair, and was subject to admiration of how he works his hair as shown in one episode.

Brad, being the oldest, decided he deserved a room alone, kicking Randy out with Mark. Maturing a little, he stopped picking on Mark by his teenage years, and by the end of the series, grew closer to him, even sharing a room when their uncle Marty moved in, occasionally with his two daughters.

Brad had a partner-in-crime relationship with Randy, frequently picking on his little brother Mark and pulling cruel pranks, though Randy was usually the one to speak for both of them when in trouble. Eventually; however, Brad and Randy went separate ways and Brad moved on to develop his interest in sports. In the beginning, his relationship with Mark was rocky, though it cleared, and they got along by the end of the series, working together with him to try to get a stain off a couch, and sharing a room with him for a short time.

Though Brad was a teenager, as Wilson explained, and was bound to rebel against his parents, he and his father were close. They both had an interest in tools, sometimes making Jill feel shut out as none of the boys shared her interests. Tim would, therefore, get hurt when Brad neglected the hotrod by spending time on his job, though he later found compromise.

All three boys have shown little to moderate interest in girls, though Brad has made girls a priority in life, early and teenage, getting one girlfriend after another.

In his early, preteen years, his girlfriend was Jennifer, a girl who stuck with him for about a year or so. They started when Brad and Jennifer went to dinner, and danced. They started sitting beside each other on the bus, and finally started dating before Jennifer dumped him because Brad lacked interest in reading, (namely David Copperfield).

After Jennifer, Ashley was his girlfriend, though their relationship was short-lived. Brad had once given Ashley a gold locket,, before Brad found out it belonged to Jill's friend Marie Morton. Deciding not to tell the truth, (going against Tim's surprising advice) he tried undoing what he did to no avail, and got into trouble with Marie, Jill, and Ashley.

Brad's longest relationship in the series was with a very talkative girl called Angela, who loved Brad so much, they came close to having sex in the episode "At Sea", but Brad ultimately decided against it, winning a battle with his conscience. According to the episode "Quest for Fire", Angela 'was a blonde goddess who worshiped the ground he walked on'. It was by that episode where Brad and Angela broke up, depressing Brad for a long time.

Brad remained depressed over Angela until he took his parents' advice, and went out and met an older girl named Samantha Hayes, a sportscaster, who he expressed his desire to marry. Out of all the boys, Brad is the only one to have expressed a desire to marry a girl, (though Randy and Lauren are potential candidates).