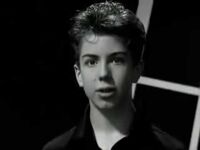 Marcus "Mark" Jason Taylor is a main character in Home Improvement. He is portrayed by Taran Noah Smith. He is the youngest brother of Brad and Randy and the youngest son of Tim and Jill Taylor.

As a young boy, Mark was portrayed as the "dork" of the family, as Brad and Randy often tormented him. From Seasons 1-3, Mark was the victim of different jokes, gags, and pranks, mainly from his older brothers Brad and Randy, who had thought up such pranks and gags on the spot for him. In his younger years, Mark found out he needed glasses due to poor eyesight. Afraid of being called a dork, he kept it secret, Brad and Randy in on it, and surprisingly faithfully, kept it to themselves. However, he ultimately got glasses for reading the board in class and watching television. Eventually, he took off his glasses, and got contact lenses instead.

As he had no time with his brothers, and often pushed away, he adopted activities he could do as a child, such as cub scouts, taking Karate lessons, computer class, and by the age of ten, started building model airplanes which ultimately led to him taking flying lessons for a short time, therefore making fewer appearances in the episodes. As a child, Mark had an interest in cooking, tools, and flying.

As a child, Mark inherited his fondness and interest in tools from his father. He took interest in a torque wrench, and even helped Tim work on the hotrod, leading to Tim thanking him when he finished his first one. Interest in tools either disappeared or wasn't portrayed as he got older; however, and he moved on to filming, music and cooking.

In an effort to build his self-confidence, Tim enrolled him in a Karate class with Master Cho. His Karate, like cooking, would take fruition in his teenage years.

Mark, as a ten-year-old, enjoyed making model-airplanes as shown in the episode "Fear of Flying." This love of making model airplanes led to Tim taking him to a museum, and Mark taking flying lessons for a short time. When Mark admitted to needing glasses, he even asked Jill, perhaps as a reference to his interest in flying, if he'd 'look good in aviator glasses.'

Mark, as a child, enjoyed baking cakes and cookies with his mother Jill. This would later come to greater fruition when he became a teenager.

During his teen years, Mark began to adopt a more goth look and an anti-establishment kind of attitude. Mark's darkening demeanor worried Tim and Jill on several occasions, Jill sarcastically remarking the possibility of him worshiping the devil. For one thing, he dyed his hair green, painted his fingernails black, and even wore black lipstick on one occasion. Ultimately, he shaved his hair when a girl dumped him, and Tim expressed worry he'd take drugs up as Brad had done. Jill herself became terrified that he had a desire to kill them when he was shooting a video about such a plot. Also, Mark got taller in his teen years, which resulted in him being taller than Randy and eventually being taller than Brad.

During his goth phase, he grew a fondness in the areas of film production, music, and even his childhood enjoyment of cooking with Jill took fruition once more, and he became a good cook, (according to Tim, a 'better one than Jill').

As a teenager, when being trusted for a night to make food for the family, he did so, taking great care and handling the food with such delicacy. Ultimately, Tim commented that the food was better than Jill's cooking, which was known to be bad.

Mark grew a fondness in the area of film production, and took it up as perhaps his primary interest. He ended up making two memorable videos.

One video was a Greased Lightning Music Video promoting Tool Time and Tim's hotrod. He got that deal from Tim, who asked him to make the video. After giving guidelines, Mark found it a good job worth doing, and it was a success. The video was the result of a second attempt at the promotion video, after the first attempt turned out to be a dud due to Mark overdoing the filming techniques.

Mark also made a horror video alongside his friend Ronnie. That video arguably defined, yet exaggerated Mark's feelings inside of being left out as it was about a boy who kills his parents and brothers out of anger of being left out. Insisting he didn't have a desire to kill anyone, the video proved useful and it helped Tim and Jill to understand him better and help him to talk about his problems when needed, leading to stronger confidence in him.

Karate, like cooking, came to greater fruition in Mark's teenage years, when he rose in Randy's eyes for beating up someone who was threatening Randy. Effectively having used Karate in self-defense, it led to greater confidence in himself.

Mark took an interest in loud, punk-rock music, especially the band Garbage. He and his friend Ronnie gathered some school friends and they formed a small, temporary band with one song called "The Happy Clown" with Ronnie as the lead singer.

Mark was portrayed as the dork of the family and the goth of the family. Frequently being picked on by kids at school and his older brothers, possibly because of his then-skinny stature, he was seen as a weakling and primary target of bullying.

Possibly as a result of being victimized by his older brothers, and frequently pushed away by those nearer his age at home and in school, he picked up a darker attitude, Wilson suggesting depression, citing a 'rough year,' in one episode. However, his dark demeanor never turned into anything extremely destructive. The biggest scare was the video incident, when he shot a video about a boy who killed his parents out of revenge for being left out. Jill believed this was Mark's intention, but Mark, insisting he had no desire to kill anybody, had a talk with his parents and found he could talk to them about his problems.

After that, Tim and Jill even became more confident in themselves as parents, and by the end of the series, his goth attitude was gone, and he returned to his normal self.

In the early seasons, he never really had the same interests as his brothers, and Mark's relationship with his them was never close. Especially in the early seasons, Brad and Randy would play clever, yet sometimes cruel pranks on him, such as telling him he was adopted, Tim and Jill were aliens, faking a letter by Isaiah Thomas, and getting Mark to swallow a tadpole (though the latter was admittedly an accident).

However, it should be noted that Brad and Randy expressed brotherly feelings for Mark as well. When he was around nine, Randy moved into his room as a result of a fight with Brad, and they grew a littler closer, shown when Randy and Mark played video games together and even watched educational television, showing common interest. Gags and pranks were reduced to mere jokes after which they'd playfully poke him. Brad himself agreed to keep Mark's poor eyesight a secret (though Mark ultimately told Jill anyway), and both of them expressed willingness to stick up for Mark if anyone made fun of him regarding glasses.

However, he does possess similarities to his brothers. For one thing, both he and Randy bring good grades, both are interested in educational television as they were watching some in the fourth season, and even Randy has something against establishment (as shown in the episode "Losing my Religion").

Mark's relationship with Brad was not good throughout the series; however, they grew closer in the eighth season as Randy left for Costa Rica with his girlfriend, and Brad started bonding with Mark. When Randy returned for the Christmas holidays, he had expressed his surprise that Brad got the chance to get to know Mark better.

It can be assumed that when Brad left for college, and Randy returned after his one-year study, he also got the chance to get to know Mark better.

To summarize Mark's relationship with Brad and Randy, one can say similar, but not 'yet' close.

As a child, Tim and Jill served as Mark's backup against Brad and Randy, creating a sort of balance in the house. Tim had stepped in during a 'little brother tax' and demanded Brad and Randy pay their allowances for two weeks to Mark. Both Tim and Jill dressed as aliens to scare Brad and Randy when they tricked Mark into thinking Tim and Jill were aliens. Jill instructed Mark to write a fake letter from Isaiah Thomas when Brad and Randy wrote their own in an attempt to fool Mark.

Mark's relationship with Tim was deeper probably as Tim promoted his interest in tools and even had Mark help with the hotrod Tim was building. Tim also increased Mark's interest in sports, and ultimately became the most 'interesting person in Mark's life,' (though it was originally Wilson).

However, when Mark went through his goth phase, he distanced himself from his family, and Tim gave up a space mission on behalf of Binford to watch Mark with unease for fear of Mark taking drugs up as Brad had done.

Despite setbacks; however, at the end of the finale, Tim expressed his love to all the boys and confided in them he raised them well to be fine people.

Unlike his brothers, Mark never had a serious relationship within the series. When he was young, it was mentioned that Mark was annoyed by a girl following him around, still too young to 'discover girls.'

When he was a teenager, he started flirting, especially within the seventh season. One was with Erica, who never developed a bond with Mark because Mark took Brad's advice and failed to hear her problems. He was also interested in Jenny Curtis, a girl interested only in average guys, so Mark claimed to be a 5 out of 10 in order to meet her standards. The one relationship Mark had that evolved to the dating level was with a girl that was never named or seen, two facts Randy brought up suspiciously. As a result, Mark made a change to his appearance and his goth attitude disappeared. However, the relationship was short-lived, and ultimately worsened his appearance.