Timothy "Tim" Taylor , also known as "The Tool Man", is the main character of Home Improvement, who is portrayed by Tim Allen.

Tim Taylor is the husband of Jill Taylor and father of Brad, Randy, and Mark, and lives in the suburbs of Detroit, Michigan. Most of his time is spent in his garage, working with his large collection of tools on his hot rod.

A hot rod enthusiast, Tim is knowledgeable on all things related to cars, and is fond of listing the different parts inside a particular car that catches his attention. Tim is also obsessed with building things. This is usually followed by his trademark grunting. He is also somewhat obsessed with modifying machines and household appliances for "more power" (a favorite catchphrase of his), because he likes doing things the "man's way". Most of the time, the rewired machines will backfire and cause some kind of accident. Nevertheless, he tries to pass these qualities to his sons. It has been shown on some occasions, most notably at the end of the episode "Ye Olde Shoppe Teacher", that if Tim pays attention and follows instructions without trying to give things more power, he can be an effective craftsman. He is also a big fan of the Detroit Lions, Detroit Pistons and Detroit Red Wings. And he is also known as trusting, industrious, mature, thoughtful, altruistic, understanding, loving, optimistic, relaxed, tidy, independent, meticulous, truthful, accountable, fatherly, observant and reasonable.

Tim is witty, and caring, but a hastily incompetent know-it-all tool man. Audiences think, however, that Tim does this kind of stuff on purpose to tell the audience what not to do. In actuality however, Tim just doesn't know as much as he thinks he does; Al often proves he is the more knowledgeable of the two. He hosts his own television program, Tool Time, in which he, his assistant Al Borland and his girl helper Lisa and then later Heidi teach audiences about home improvement. Before becoming the host of Tool Time, Tim was a traveling parts salesman for Binford Tools. While Tim considers himself to be the star of the show and is a celebrity in Detroit, Al eventually becomes the more popular one with the viewers. Tim's rival is real-life home improvement specialist Bob Vila, who made a few guest appearances on the show. A running gag is when Tim accidentally causes destruction to anything he touches -- from the world's smallest car to running over golf carts -- with a Marine Corps tank.

Living next door to the Taylors is Wilson, the man who Tim sees as a father figure and helps him with his problems by quoting philosophers and historical figures. Tim, who is apparently not as intelligent as his wife Jill, has trouble understanding what Wilson tells him but eventually manages to figure it out on his own. However, he tends to mix up the words when trying to repeat Wilson's quotes, always to humorous effect. Tim, or any of the other Taylors, have a crisis ending conversation with Wilson in nearly every episode, even when traveling considerable distances. In one episode, Wilson points out that "Tim Taylor" spells out "mortality" when rearranged.

Though ultimately good friends, there was a tense relationship between Tim and Al. Al was portrayed as a slightly geeky character, usually having more knowledge, skill, and audience popularity than Tim. His catchphrase, as an opposition to Tim's ill-advised ideas or jokes, was "I don't think so, Tim." He also came up with many puns and giggles and snorts when a joke is made at Tim's expense. The cautious, insecure, brighter Al always bore the brunt of Tim's jokes and constant put-downs. Al is frequently taunted by Tim because of his weight, beard, in Tim's eye bland personality, his overweight mother, poor sense of humor and his preference of flannel shirts (and often other flannel items such as an oversize pair of flannel briefs in the episode "The Karate Kid Returns"). Tim typically uses his television show to vent about numerous problems he is having in his personal life, and Al is usually very annoyed by this. A running joke for Tim was commenting on Al's overweight mother, who was often referred to but was never seen throughout the series (although in the penultimate episode of the series, "Dead Weight", she died, and the characters were shown paying their respects at her extra-wide coffin which showed her body but not her face. Also, prior to her death, her arm can be seen waving (with a leg of chicken in hand).

Tim has seven brothers, Jeff and Marty, who were seen in various episodes, John and Rick, who were mentioned in the episode "Oh, Brother", Steve, who is mentioned throughout the series, Brian, who is mentioned in the episode "The Naked Truth", and Danny, who is mentioned in the episode "He Ain't Heavy, He's Just Irresponsible". Jeff is Tim's only older brother, and has a history of failed businesses and 2 ex-wives. Marty, the youngest Taylor brother, works in a factory, and has 2 twin daughters. Rick is a lumberjack, while John is a United States Marine Sergeant. Steve is a truck driver, and Danny is a locksmith. Tim has strained relationships with most of his brothers due to his constant teasing and overall know-it-all attitude. Of all his brothers, Tim is the most successful. In order from oldest to youngest is Jeff, Tim, Brian, Steve, John, Rick, Danny, and Marty. His father, Michael Taylor, died when Tim was only 11 years old (the same way Allen's father died in real life, colliding with a drunk driver) which had a profound impact on Tim's life. His mother, Lucille Taylor, is seen mostly in Christmas episodes and various others. Tim has no sisters. 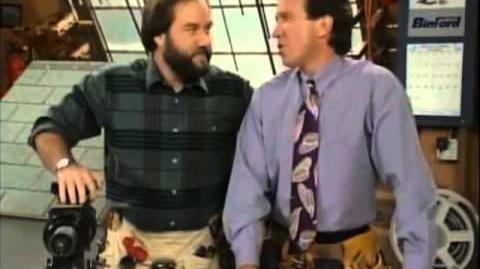 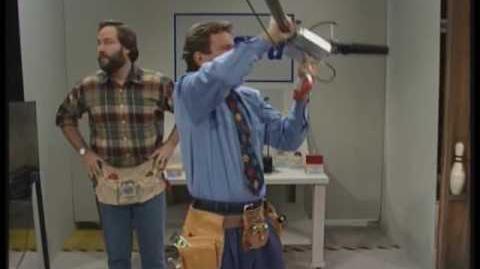